11.05.2009
I am led to think that one of the things that I believed my whole life might not be so true. For me and almost everyone I know, setting down roots and getting established has meant a certain set of events and conditions. The primary change to this thinking has been to let go of the house/dwelling concept as we have adapted to the mobile and arguably less secure environment wherein "home is where we park it". It's been a fun adventure after all, and it seems as though we can 'come home' wherever we are. It's not that we don't still talk about 'settling down' and it's not that we don't miss what we left behind ... but we've had some pretty cool opportunities to see some pretty cool places and set ourselves up as 'visitors' while we're in our home. What I really like is the capacity to explore from new center points. This was a fairly frustrating aspect of the big move last year, mostly because we were constantly lost; having to search out and discover everything from Starbucks to groceries, doctors to gas stations and places to eat and shop. How bad is it when you don't know where the nearest Home Depot or (gulp) Best Buy is???  In a year, we've found only one quarter car wash :). All in all, the ordeal has been adventure. This is due to the spirit which we came here in and even though it's been tried a few times it has prevailed. We have so much to be thankful for.


So last week we hooked up from our nearly 6 month stay at Topeekeegee Yugnee County Park in Hollywood (just south of Fort Lauderdale) and pulled back down to the south side of Miami (Cutler Bay).  The trip was uneventful (except for nearly missing an exit and doing a tiny section of cross-country travel at 55 mph with the trailer in tow ... but we won't expound on that particular adrenaline event except to note that Fordzilla doesn't seem to care if there's a 14,000 pound trailer attached or not ... four-wheeling is fun!) with Robin driving the car and me driving the truck/fifth-wheel combo.
*One of our ~favorite~ interchanges*

It was about an hour's worth of travel and we arrived at the Larry and Penny Thompson Park around noon.
Now this is something of a 'homecoming' for us, as this park was our very first parking spot when we arrived in Miami just over a year ago. It was actually very cool to come driving in to RV area and be in familiar territory. We had a lot of memories attached to this park, and this area of Miami; mostly surrounding relocation trauma mind you, but now that we have grown more comfortable with the lay of the land and now that we have had a year's experience living in the RV there was a different attitude prevailing as we pulled in, greeted the office staff (who remembered us!) and proceeded to set up the coach in our assigned space.
We've done the 'prep for travel' and 'set up housekeeping' drills a few times now, and Robin is an excellent partner when it comes to helping her 'backing-a-fourty-foot-trailer-with-a-long-bed-truck' challenged husband to spot us in our parking slot. No trees or electrical posts were  harmed in the parking of the Fifth-Wheel (not this time, anyway). We got set up and were relaxing with lunch in an hour or so.
*Just for the record the procedure is to:
-Establish alignment in the parking spot.
-Establish left-to-right level in the parking spot. This involves placing a couple, or several, leveling blocks under the wheels and pulling/pushing the coach onto them and determining 'level'. Rinse and repeat if necessary.
-Chock the wheels and lower the front struts (landing gear).
-Using the landing gear, remove the weight from the hitch pin (about 2,400 pounds of it), release the hitch, uncouple the electrical and emergency brake connectors and drive the truck away.
-Check the chocks.
-Level the coach fore-to-aft.
-Check the chocks.
-Lower the rear stabilizers (usually onto cement blocks if they are over grass)
-Tighten the chocks .. they will loosen after stabilizers take some weight off the axles.
-Verify clearances around the coach to extend the sliders (no trees, no posts, etc.)
-Robin will extend the rooms while Gary connects up to shorepower, water, sewer and satellite receiver.
-Unhook the bikes from the rack on the car, drag out the lawn chairs unstrap the furniture, re connect the surround sound (the cables to the subwoofer have to bestowed before sliding the room closed) and voila! we have the afternoon to relax. Oh wait, maybe I'll check those chocks onemore time... 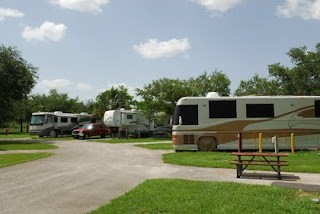 Larry and Penny Thompson park is a particularly popular destination for snowbirds. I think there is a measurable decease in the population of Canada from November to April, but am only judginfrom the number of license plates from Quebec. When we checked in, we were assigned a "pod" and "Spot" number. The park is laid out with a series of eyelet-style circular cul-de-sacs extended on both sides of the main drive. In each of these cul-de-sacs, RVs can park inside and outside of the circular drive like spokes on a wheel. There are 12 pods each accommodating around 18-24 RVs. That's a lot of Canadians :)

Moving in on November 1st, we were just hitting the first days if 'High Season" for tourism and there was a lot of activity already. During the next month or so the park will fill to capacity and each week will bring a turnover of tourists coming to visit for weeks or months at a time. There are preferences given to those campers who come back every year and since we were pretty sure we'd be back, we placed a deposit on a site when we left last spring. We had been promised availability, but since we were 'newcomers' to the system, we were only guaranteed a place during November and December. In January, it was up for grabs depending on whether or not a previously reserved spot might be cancelled. So we set up thinking that we'd be here for at least two months, and hopefully six, the maximum length allowable.  It was only two days later that we moved again...
We were notified that indeed there had been a cancellation, and that if we wanted to we could make the ove to a new spot and stay there for the whole six months. Yay! So ... follow the checklist backwards, then move 200 feet, then follow the checklist forward :) 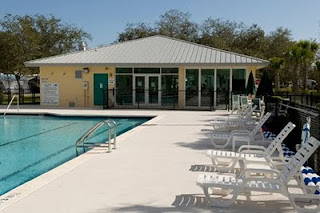 Our anniversaries are many. Sometimes dates stick in our heads as indelible reminders of events that define our lives. Pretty powerful sentiment, but true nonetheless.
Robin and I share several imporant dates each year; reminders of the significant changes that we've been through both individually and as a couple. We remind ourselves of our early times together and remember our first kiss, the engagement and, of course, our wedding day. We also keep track of things like the passing of a parent because to recall them is to keep their memory alive with us. Robin and I remember this date (10/27) because it represents one of the biggest life changes we've ever made (and one of the bigger ones we've even heard of).
A year ago on this date we arrived at the Miami ARTCC for our first day of work at our new facility. It represented so much planning and hard work, a lot of sacrifice and a whole lot of insecurity. Most people don't just decide to pick up stakes after 25 years in one place, get rid of nearly every material possession that surrounded them, and move across the country in a 5th-wheel. True, there are much stranger stories but this was an absolutely huge step for us.
We planned this out, thought it through, talked endlessly about it, prayed about it and tried to reconcile the logic with the dream. It was a hard, hard time and things seemed to bounce back and forth between 'everything is working out fine' and 'nothing is going right'.
We fought hard to put houses on the market, sell big ticket items, donate most of our little stuff away and foist a lot of stuff, good and bad, onto the kids for their use. In the end it came together well enough for us to pull away on schedule and arrive in Miami on time and ready to go to work.
The year has been amazing; in every sense of the word. From the moment we set foot on the new job site it became apparent that it was a reality that was far separated from our visions. That we were 'not in Kansas anymore' is about as close as I can come to explaining how if felt to be on what could reasonanbly be considered foreign soil. The list of things that were different, challenging, nonsensical and hard to grasp was every bit as long as our list of what we expected, hoped for and understood about the world.
It was a complete change of culture, a total immersion into an eight-million person habitat replete with 20 distinct and different civilizations inhabiting the same sardine packed landscape. Languages, traffic jams, foods on the shelves of stores, traffic, bureaucracy and lines for literally everything slammed us with the insistent message of "what have we done?".
We've counted our expenses (although they still mount) and we've accounted for our gains. In summary we can not truthfully say whether this was exactly the right decision at the right time, but we cannot deny that we struck out in faith toward a dream that so many profess but so few actually pursue. We did what we said we were going to do and now we are a grand step closer to fulfilling our dream.
In the year since we pulled away in "Fordzilla" we have:
- Both been successful in training and certifying as Front Line Managers at a new and difficult facility.
- Lived in 5 different locations while sleeping in the same bed and learned more about our locale in one year than most of the residents have in 20 years.
- Purchased a sailboat.
- Made a noticeable difference to some other people, both inside and ouotside of the workplace.

The next year promises to be filled to the brim with more changes and challenges and opportunities. We will try to hold on while we race toward slowing down.  Here's to another one, not like the other one!