We're on the water!

About 2 months ago Robin and I began discussing the reasons we packed up, sold everything and moved to Florida to begin with. In the actual process of changing jobs and traveling halfway across the country we have had the awesome opportunity to explore places we wouldn't have seen, meet wonderful new people, and face down some tough challenges with culture-shock and the mess that is now the U.S. economy. During the last six months just about everything that can change for us has changed...except our committment to each other and to our dreams. So... we've been reeling a bit, feeling a bit lost and overwhelmed by it all. We decided that it'd be best to make it to the beach more often. This was mostly so that we could look out over the water and say "that's why we're here". We've been to the marinas to walk around, we've been to the boat shows to look at dreams, sold on impulse to others, and we've kept our goals on the table for us to look at and dance with. We do not want to forget why we've done this.

About 3 or 4 weeks ago the idea surfaced that we could start looking around for an inexpensive power boat, perhaps one that had a little cabin space in it in case we wanted to go for an overnight outing somewhere. I admitted that I wasn't really keen on the idea becuase it didn't fit into my scheme of getting into our big sailing boat but I warmed up to after thinking it over for a few seconds (grin). It seemed smart to me (that Robin, she has the best ideas sometimes) that if we could get on the water and begin learning that part of our world it would help us stay focused on our plan and keep things in perspective as we go about the daily grind of work and traffic and noise. I warmed up to it thinking that we could "toodle" (not a nautical term) around the waterways in Florida (and there are a few of them) learning things like navigation and where to pull up and find a good sandwich and diesel mechanic in the same store. I got to thinking it would be fun to just get off work and climb aboard for a relaxing sunset out over the bay. It all started to sink in ... so we started searching for a power boat. At first I thought it might be a real cool idea to join a club around here; just a monthly fee, no maintenance, just schedule and go and pay for gas. ... but they are asking several thousand dollars as a membership fee up front and I couldn't quite choke that down considering I didn't want to do this (rent from a club) for more than a couple of years at best. So a-shopping we went.


All told we probably only looked at 10 or 15 boats. There are literally hundreds and hundreds of them on the market around here but what we found consistemtly is that the powerboats were not in as good shape as we would like. Boats that were only 5 years old were moldy and damaged and some boats we saw (repos mostly) had been stripped of all their gear and electronics either by the owners who knew they were about to lose the boat, or by the outfit trying to make a buck on the boat and another one selling back the equipment. It was disappointing and disheartening as we did not want to invest much money in a temporary arrangement, but it appeared that unless we were willing to buy new or close to new we were going to be saddled with a 'project' boat. That's not what we wanted.

Last week I answered a couple of Craigslist ads and we drove to go see the boats. The first was a 28ft Bayliner that was just a piece of junk. It was dirty, smelled badly of gasoling below decks and had several major issues with steering and covered-up damage. The trailer it was sitting on was about to rust through (shackles broken on the leaf springs and the like) as we had a bad feeling about the whole thing. The fellow was 'very motivated' and was telling us all the goood things about the boat; like how much fun it was to party on. He lowered the asking price but we declined. The next day he called me back and lowered it again by nearly 25%! We declined...

The next boat we went to look at was a departure from our plan. I'd seen it on Craigslist about a month earlier and it showed up again as still for sale. Since it was a sailboat we'd not considered it before but decided we would go take a look anyway since we were gettin tired of the same old story when we shopped for powerboats.

Well, love at first sight and all ... 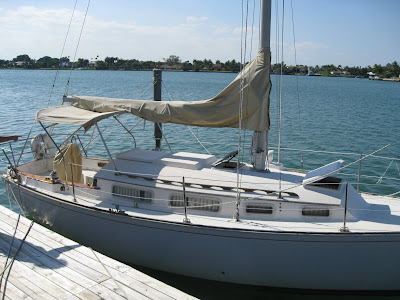 This is a 28ft Sabre sloop built in 1977. As a 30+ year old boat we expected to find much the same as we have in previous shopping but we were surprised to climb aboard and find that the owners had taken great care of her.

It is the answer we were looking for, at a price that's right where we wanted to be and we are thrilled to announce our find. 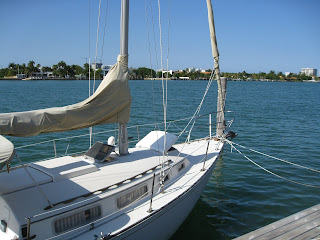 It's an all fiberglass hull and teak interior.


Up front is a furling jib sail and an additional 'forestay' that we can run a bigger sail called a 'Genaker' for light breezes. 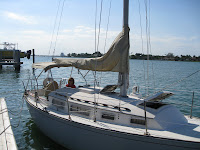 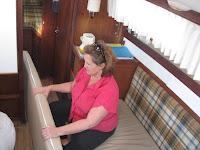 Robin goes below deck and figures out the inner workings of the dinette and additional sleeping berth. If we were insane enough, we could probably sleep 5 aboard down there. although there would be precious little room to move about.


There is a galley ... ok .. a sink and an icebox. We'll work out the arrangement to heat food on a butane or propane stove in short order, but the old alcohol stove had wisely been removed some time ago. 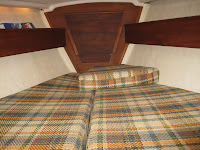 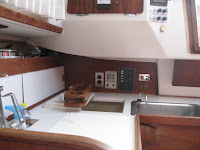 A V-Berth in the front would sleep one handily or two cozily. The cushions, wood, and liner were all clean and dry. There's a big hatch overhead for fresh air (or rain if you're not careful). 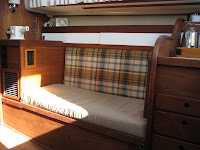 There's a nice little sitting area on both sides of the salon and the dining table actually folds up flat against the wall out of the way (not seen here). The cushions and fabric are all in good to fair shape so we will see what it takes to bring up to like-new before too long.


All in all we were totally pleased with the condition of the boat. Yes, there are some spot to be worked on. Yes, there are some rust spots, some crazed plexiglas and some woodwork and metal that need to be stripped, stained, polished, sealed and maybe replaced. Yes, we'll be working on some wiring and plumbing and maybe even try to patch a small crack in the fiberglass near a footrest. But it's a 32 year-old vessel and I truly think we've found a good one; and what better way to learn how to maintain and care for a sailboat than to have a 'starter' one. We now have the opportunity not only to experience the joys of getting on the water but for us to learn at the entry level how systems work (and how to fix them when they don't), what the care and feeding of a sailing vessel is really like, and to have just the right level of 'project boat' on our hands. All of this will work because we're not throwing a huge amount of money into buying the boat and we have time to go slowly, take it at our own pace, and experiment and learn without pressure to get going anywhere

Oh this is going to be fun. And ... did I mention the "piece de resistance" ?

Did I say anything about why this purchase was a foregone conclusion when we first stepped aboard?

You're not going to believe it anyway... 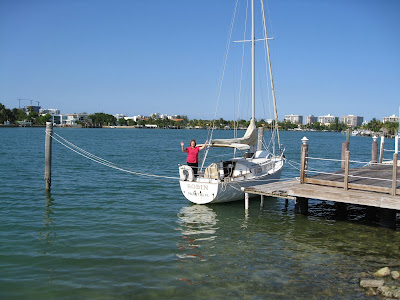 We genuinely did not know the name of the boat until well after we'd decided on it. ... amazing ...

Finally ...
We've been cramming for finals for about 6 weeks now.
I know I've spoken of this before, but it is amazing to me still that our training department has tasked us with learning the exact same level of technical detail as they would ask of a new employee who's never done air traffic control before. Add to that the concept that as managers we will never be called upon to work high-volume complex traffic as we did as full time controllers and our "knowledge needs" are vastly different than those of the controllers.
Nonetheless we've been training and studying to achieve test scores on complex procedures and map memorization requirements. The big difference is that we haven't had the luxury of classes or teachers... it's all been unguided self-study without a syllabus and without any periodic check-ups on how our progress is moving toward the end goal. Very weird way to run a business.
Imagine being handed a 700 page textbook on varied subjects related to your job or schooling and being told "go learn everything in there" knowing your future depended on passing a written test pulled from random minutia out of the book (in our case books). We didn't know where to focus our studies or what areas would be tested. At one point it seemed logical to take the test intending to fail it, just to learn what we needed to study but we were told that the tests are random pulls from about 600 possible questions and we wouldn't get the same test twice.
So... we got frustrated, we got a bit angry, we studied and quizzed each other and made up our own tests for practice and tried to understand everything that we could glean out of the orders and procedures... and we took the tests ... and we both failed the first time.
Now, a 72% score (or in Robin's case a 76%) isn't horrible, really... and last year it would've pased us but they changed the requirement a few months back to 80% so we had to practice up for a re-test.
And I am proud to say that we both passed! ... So ... what's next?
Training of course :)
Robin and I will both begin training in the operational environment first by sitting behind the controllers and familiarizing ourselves with what they do then by having an instructor behind us as we progress through all the operational positions and become proficient as controllers again.
~Then~ after we've demonstrated that we can control air traffic, we'll begin training as supervisors and will not touch the actual sectors again except for our compulsory 8 hours per month of currency time. hmmm...
It's a mystery to me yet, but I believe that they have a plan and that this is a new cultural environment that I have to embrace even if I don't fully understand the why of it.
Well, we celebrated the passing of the tests and the progression to the next phase.