Glory Be and Disney Too!

Few things are as simple as going on a cruise ship. I love the concept of a ‘floating hotel’ and it sure is a great way to be introduced to places and cultures that you might otherwise pass by as, at best uninteresting and at worst, too risky. The down side of taking a cruise is, of course, it costs money.
These last few months have indeed been tough; on our family and friends, on the country in general and on us. Many of you know we are still waiting for under-valued properties (ok, maybe they were previously over-valued) to sell and free us from the mortgages. So, we are sitting tight on our big plans to buy the dream boat and we are reigning in expenses as best we can. Then along comes George Leppla and his “Recession-Buster” cruise idea.
George is a first class Travel Agent in a world where the whole Travel Agency concept has changed. So many people book online now that TAs have had to adapt and find their own kind of specialties to be successful. George has found a great specialty in putting together group cruises and he continues to offer some pretty cool ideas for the cruisers in his circle. Robin and I have been on a few, and while we were actually not planning another one this deal jumped up and we decided to grab it.
Now this is an(other) unsolicited plug for George because I like the way he does business; simple, up front and honest. 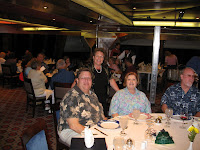 (George and Becca, with Robin)

Go visit his website at http://www.cruisemaster.com/ and take a look at the next couple of trips. We aren’t planning on any in the future as we want to focus mainly on or sailing plans, but then … you never know.

We climbed aboard the Carnival Glory after a quick-turn from a swing shift and a 4 hour drive to Orlando. 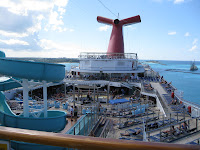 The plan was elegant and worked like a charm: The ship was leaving from Port Canaveral, which is very close to Kennedy Space Center, at 4:00 P.M. We backed it up to 1:00 P.M. target arrival in order to allow for any unexpected delays and backed it up further to drive into Orlando proper to pick up our Mom who was flying in to make the cruise too. After a quick grab and dash at her hotel (OK, it was a great reunion time too) we scooted the 40-something miles to Port Canaveral and actually made it there around noon-ish. The crowd was already gathering and the lines were forming. Now Mom has a VIP pass of sorts as she travels by electric scooter a lot and they have specially accessible entrances available. I dropped Robin, Mom, the scooter and the luggage off and went to park the truck. This was my first disappointment. The Port authority, I realized, was something I should've given more consideration to as 1: they have a captive audience if you drive up there and 2) the parking is exorbitantly expensive. There’s simply no other game in town and 3: after I paid over a hundred dollars for a week’s parking I drove up the ramp and met an attendant who then told me that the parking garage was full. Hmmmm … There was no room to turn the truck (FordZilla) around on the ramp so I backed ever so carefully back down and did find a nice spot nested under a palm tree to call a parking spot for the week. In hindsight, I never checked for coconuts and that could’ve been a problem if a big storm had come through while we were gone (things you don’t think about living in Colorado).
When I got back to the line, Mom had gone ahead and Robin (as is here style) had a nice conversation going with some new-found friends in the line. We thought it would be OK to stay in the line that mom had gone in and see if we could catch up with here, but alas she is an expert at this process and while we were delayed in the line she motored on through and was done checking in and on her way to her room before we ever got through the first metal detector. We were definitely playing in her territory now :)
Checking in was actually an easy affair and we found ourselves aboard and in our stateroom (all 315 square feet of it) a little before 2 P.M. All went very well and we wandered around a little until it was time for the requisite Life Boat muster and drill. I don’t mind the drill, it is at least a reminder that should something happen, you have something to do. This particular drill was a bit out of the ordinary though and the safety announcement soon gave way to several other ships’ announcements that began to wear on our patience as we stood there dressed in our life jackets. Ah well, the whole thing took all of 25 minutes, no biggie.
We set sail and motored out the channel and past Milliken’s restaurant where Robin and I have enjoyed a couple of good meals, once while waiting about 4 hours for an eventually aborted Shuttle launch, and then past Jetty Park and into open water. The ride was nearly perfectly smooth the whole trip and the weather was as good as it gets considering it was smack in the middle of hurricane season. We were blessed with clear skies and warm-to-hot days for the whole week. The trip went to Belize, Cozumel, Costa Maya and Nassau. 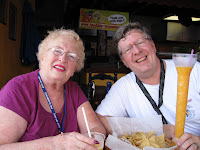 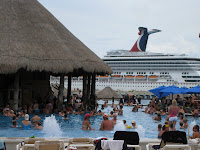 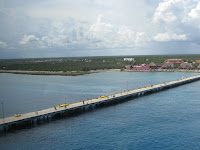 (Costa Maya: Yard-long Daquiris, a swimming pool in the shopping area and a view of the pier pointing toward old-town.) 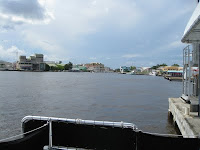 Our determination was to make this trip one of minimal expense so we passed on taking any formal ‘excursions’ provided by the ship and instead got off on foot and explored a little bit of each destination. Surrounding any cruise ship port there is always a bustling shopping district (well, except for Port Canaveral) and Robin and I spent some time ashore at each port wandering the shops, which all seem to meld into one big tourist trap after a while, and doing a little bit of exploring to see if we could round up a Geocache or two. 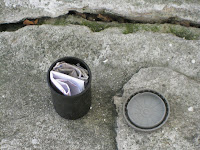 We had good success coming up with a few finds and we dropped of a “Travel Bug” while we were out and about in Nassau.
Nassau was our biggest outing as we hiked around and did some sightseeing on our own. Geocaching often gets you going to some out of the way places and in Nassau we found a nice little commemorative park that is off the tourist beat but very interesting indeed.
We hiked up the hill to find the old Water Tower and toured an old Fort, 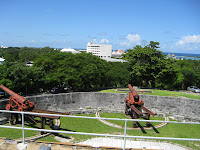 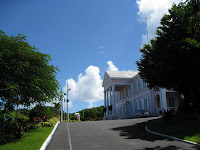 and back into the shopping district. Of course we had to stop at Dunkin’ Donuts when we passed by to get a cold drink and take in some air conditioning for a while. 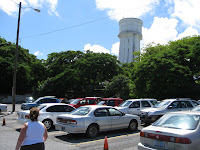 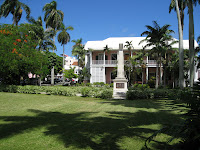 We were both appropriately hot and sweaty when we arrived back aboard and what little shopping we did yielded a couple of ‘treasures’ from the islands. 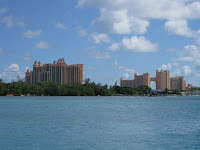 We enjoyed our time aboard, relaxing with a couple of good novels and taking in some of the ‘features’ of all-you-can-eat dining. We spent time sitting and looking out to sea, lounging over a glass of wine before the dinner seating and walking hand-in-hand for no apparent reason and to no particular destination. A very big reason we decided on this trip was to get together with Mom and to get away from the work and city stressors that have pervaded our time here in Miami. It was worth it, it was great, we stuck to our budget, we almost stuck to a diet (giggle…who am I kidding) and we had a great getaway. I’d encourage anyone looking for an escape to try it. It’s easy and not too expensive these days. Plus there are ice cream machines at both ends of the ship :)
--------------------------------
Well, what do you do after a cruise?? Go to Disney World of course.
Mom had built in an extra day to her itinerary before flying back to Washington and we decided to spend it Walt Disney World (WDW). We booked a rom at a hotel on-property. Not the cheapest way to go by far, but the immediate access to the Disney transportation system was well worth it.
We spent a wonderful day touring the Magic Kingdom which was decked out in Halloween regalia every where you turned. We rode the compulsory rides and hiked around the park for the better part of the day. A heavy downpour played havoc on us once and we decided to head back toward the hotel as the skies darkened up for a second act. We no sooner made it to the shelter of the monorail entrance than it began pouring down and we were thankful for our good call to head back.
During the visit we did some serious Pin-trading, which is a great way to meet some of the cast of Disney, see some places (such as other hotel lobbies).
We had a pretty good dinner at a restaurant that overlooked part of the Savannah from Disney's Animal Kingdom and watched giraffes, antelope and other animals graze across the area just outside out window. Pretty cool.
Well, here's to a great time had by all. Can't wait till we do it again. ... ... ... in about a week,
Posted by Gary & Robin Wells at 10/22/2009 10:48:00 AM No comments: